Blog - Latest News
You are here: Home / Fishing Report / Not much has changed….YET! 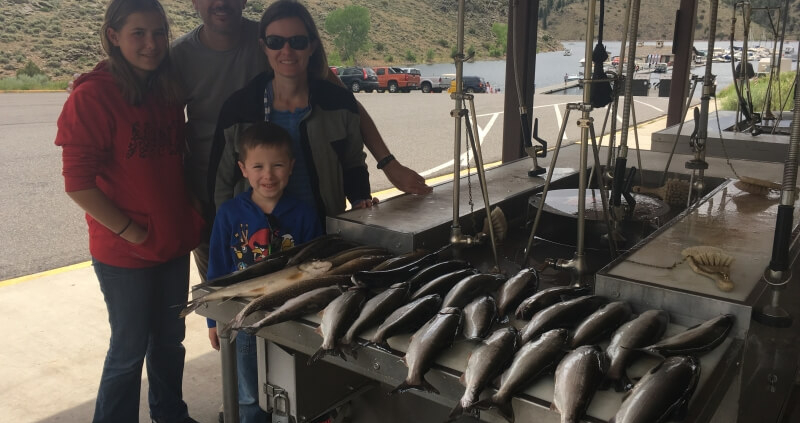 Our summer pattern has held fairly steady over the last month with very good salmon fishing being the norm most days!  This is great news as the last two years had a lot of people doubting the fishing this year.  Blue Mesa reached its max water elevation on July 7 at just about 3 feet below full pool, but has since dropped a little to four feet below full pool.  There hasn’t been much floating debris, there hasn’t been very much algae build up on our lines and the water temps stabilized in the 66-68 degree range.  We have had some incredibly windy days (mostly mid day) over the last two weeks.  Right now all of the boat ramps are open from  5:30 a.m. to 9 p.m. except for Ponderosa which is open from 8 a.m. to 4:30 p.m. Thursday through Monday.

Trout- the trout fishing has been fair to good, depending on which part of the lake you fish.  There are concentrations of Rainbow trout in some areas.  Bait fishing from shore has been producing the most rainbows, while trolling an assortment of Rocky Mountain Tackle and Radical Glow squids and spinners has been the producer for browns running 30-80 feet deep.  I encourage you to keep your limit of brown trout under the 20″ mark, as there are plenty of them!  We are starting to see more brown trout over the 20″ mark, which has the potential to be an incredible resource and add even more value to the fishery at Blue Mesa, especially if we can release those fish to keep their genetics dominant in our lake!

Kokanee- salmon fishing has been very good!  We have seen the avearge fish put on an inch and get fat in the last month as water temps are ideal for peak metabolism!  The depth these fish are hanging out at depends on which part of the lake you fish, but you can count on seeing concentrations hanging out from 10 to 50 feet deep with some coming shallower or deeper than that. It all depends on the school.  The small fish will pretty much hit anything, but the bigger fish are more particular so don’t be afraid to pull off a lure that is working for small fish in an attempt to find one that the bigger fish are liking.  It is important that we do the best we can to release the small fish (future generations) fish in good health.  I try to avoid touching them by leaving them in the net and using pliers to get the hooks out.  Get them back to the water as quick as possible and more often than not they will release just fine as long as they weren’t hooked bad.  If you do have one die (it’s almost inevitable), it does count as part of your possession so please don’t throw it out to the sea gulls!  Read your electrconics, tip your baits with corn, and if you know you are running through fish, but you are not getting bit, change your bait until you find a combo that they like.  Rocky Mountain Tackle squids and spinners and Radical Glow spinners have been good as well as a lot of the classics, such as tazmanian devils, arnies, needle fish, GVF lures, and kokanee killers.  We have been using almost every color in the spectrum depending on the day, but pinks, oranges, and greens are a good place to start.  The trolling is good for now, but look for transitions to come soon! **Don’t forget that the daily bag limit has changed to 5 fish this year!  The rangers have been checking and handing out tickets to those who are over bag and possession!

Lake Trout- fishing is slower per usualy this time of year.  The smaller lake trout can be found on all of the classic structure that they like to hang on (points, humps, flats) in 45-100+ feet of water.  A 3.5″ tube jig in white, glow, or green with a small piece of sucker meat will do the trick.  We are catching a few mixed in with the salmon some days, but not on a consistent basis. Remember to only keep what you can eat!

Yellow Perch- The perch have moved shallow and the bite has been fair to good! Look for them in 5-40 feet of water.  There is a lot of prime submerged structure right now so the perch are spread out and moving until you find a concentration is key.  Cove areas can be good.  A small Pk spoon with a piece of worm will put plenty of fish in the boat, but a small crappie jig is a good choice as well!

**This fishing report is brought to you by Robby Richardson of Sport Fish Colorado.  Our reports are based off of my our daily outings.  Good luck and God Bless!

Lets get up to date on the Blue Mesa Salmon situation!
Scroll to top