Blog - Latest News
You are here: Home / Fishing Report / Lets get up to date on the Blue Mesa Salmon situation! 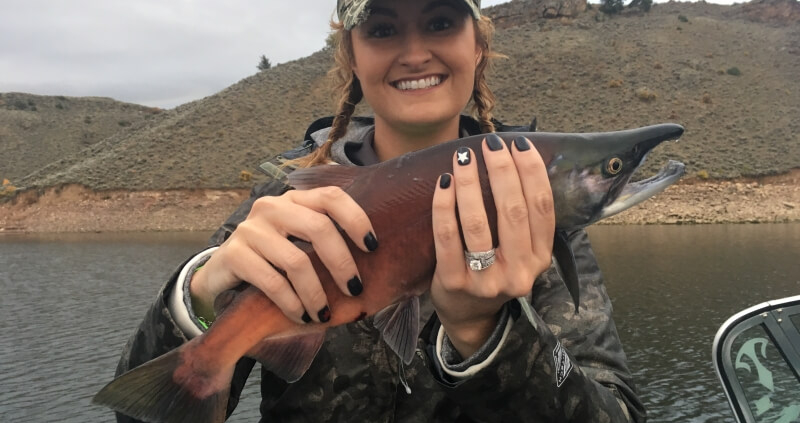 First off, my apologies for the lengthy time period in between Blue Mesa Fishing reports! A new baby, a very busy summer, and a hunting season somwhere in between all of that left me with little extra time. I tend to sneak more quick reports on my face book page. Anyhow, the Kokanee salmon bite got better and better through the month of July and August was fairly good most days for vertically jigging these fish.  A lot of salmon have made the journey up to the Roaring Judy fish hatchery and the reports that I have gotten so far are that this should be a very good year for taking eggs/giving away salmon every Friday for the duration of the spawn, which is typically the month of October!  Call the hatchery for details.

The Elk Creek Marina is currently in the process of getting their brand new main dock!  This dock will be a drastic improvement and is supposed to have electricity to each slip!  This main dock will be complete and ready for the 2017 season.  Currently, the Lake Fork, Elk Creek, and Iola boat ramps are open from 7-4:30, but Iola will be closing October 10th.  After October 31st, the Elk Creek and Lake Fork ramps will be open on a call in basis only from 7-4:30.

Trout- the rainbow trout bite has been red hot for the last month trolling Rocky Mountain Tackle and Radical Glow spinners from the surface down to about 30 feet.  We have been catching a few brown trout trolling shallow, but not many, we have caught more browns jigging with crawdad immitations in 25-40 feet of water.  Browns and rainbows should be working their way to the shorelines as well, but I have not spent any time casting the shorelines yet.

Kokanee- there are still good numbers of mature kokanee salmon in the lake and some of them are still feeding!  I don’t think I have ever seen such a good trolling bite this late in the year!  We have also been catching some younger silver kokanee salmon mixed in with these fish.  Most of the active salmon are hanging out from the surface to 40 feet depending on the time of day.  Lately, morning has been best.  Once again, Rocky Mountain Tackle assassins and Radical Glow spinners have been the ticket and don’t forget to tip with a piece of shoepeg corn.  There have been good numbers of bigger fish hanging out around the lake fork break waters and towards the dam as well as on the east end of the lake.  So far, about 90% of the fish still have fairly red meat!

Lake Trout- the lake trout should be moving shallow as part of their pre-spawn, but I have not had a chance to fish for them yet.  The mature fish tend to be a little distracted this time of year until the spawn is over, but that doesn’t mean they can’t be caught.

Yellow Perch-overall, it has been a slower year for yellow perch, but with enough searching, they can be found and caught!  Look for them in 15-40 feet of water and be ready to cycle through some lures as they have been very picky some days!