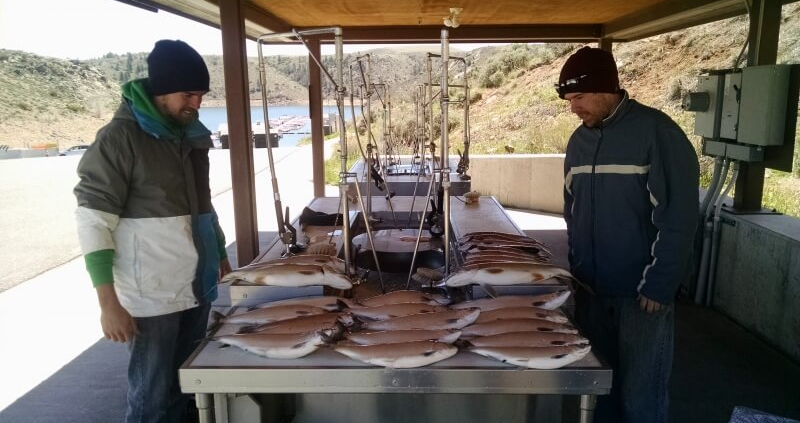 Finally, over the last four days it is starting to feel like summer!  The first warm day we had everything in the valley bloomed!  Our overnight lows are still getting into the upper 30’s and low 40’s but day time highs have been in the 65-75 degree range and water temps are rising quickly as a result! Run off has officially begun and the Gunnison River inlet area is pretty muddy. The rising water levels have lifted a lot of debris so be on the look out when running across the lake!

Trout- Fishing remains very good for trout! They can be caught casting or trolling a variety of baits including Venator Wobblers, Rapalas, and maribou jigs near shorelines or out in the open basins.  Trolling squids and spinners has been very effective as well. We have been finding rainbows from the surface down to 25′ and browns from 10′ to 60′! The east end of the lake seems to hold the greatest numbers of trout.

Kokanee Salmon- The salmon bite continues to be hot and cold, but there have been some good days!  There was a good concentration in Iola basin, but after a week and a half of pressure they thinned out.  Most fish are still hanging out in the top 20′ of the water column, but we have caught fish as deep as 38′.  There have been a lot of smaller kokanee showing up shallow lately, which is a good sign for 3 years from now! Per usual, cycling through a variety of Rocky Mountain Tackle, Raical Glow, Kokanee Killers, Venator Wobblers, and a few other baits has been producing the best results. Make sure you tip your baits with corn! Pinks, purples, whites, and greens have been some of the better colors.  With the salmon numbers down, it is more important now than ever to not take more than your possession limit!

Lake Trout- The warming water temps have pushed the big fish deep!  Decent action can be had for smaller lake trout trolling in the 35-60 foot range, with spoons, squids, and kokanee killers.

Perch- We have heard a few reports of some perch showing up. Nothing in great number, but a few decent fish have been caught!  A small spoon with a piece of worm is the ticket.