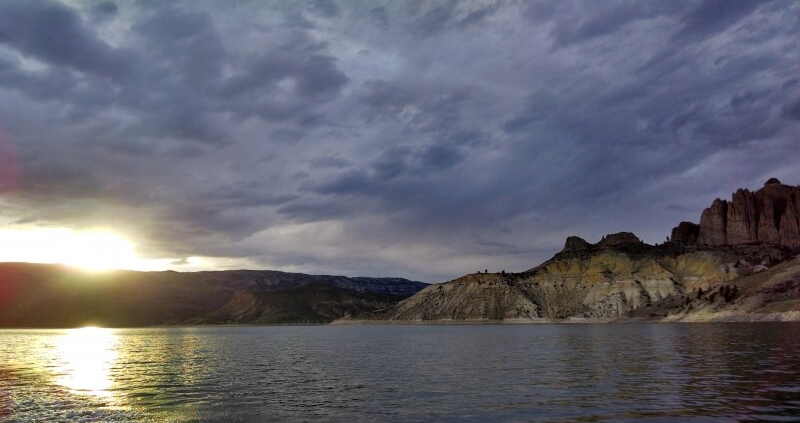 Kind of like the weather, the salmon bite has been hot one day and tough the next!  We should see a lot more consistency this week as it is supposed to be consistently in the mid to upper 70’s!  Water temps are hovering around 53 degrees and the water level has come up 7′ since the last report a week ago!  Shore fishing has been tough due to all of the submerged brush.  Focus on sandy areas where snags are minimal.  Boater, beware of floating debris and newly submerged underwater hazards!  Today I saw plankton blooms like I have never seen them before!  There were areas in Cebolla where the plankton make the water looked stained with polarized glasses!  Some of these plankton concentrations produced fish, but most didn’t.  The boat ramps have summer hours of 5:30-9 now and Steven’s Creek and Iola boat ramps are open!

Kokanee Salmon- The kokanee bite has really gained some consistent momentum over my last four guided fishing trips!  We are finding most fish in Cebolla and Sapinero basins from the surface down to 50′ with the top 10′ of the water column producing a majority of the fish most days.  Uncle joes, arnies, Rocky Mountain Tackle Squids and assassins, Radical glow spinners, and Venator Lures have all been producing.  However, as always, figuring out the right bait at the right depth at the right time has been the key to success and most of the time the fish have been a little particular!  If you put the puzzle together, 15-30 fish days are possible! Don’t forget your corn and please respect the 10 fish bag and possesion limit!  A fish counts against your limit until consumed!

Rainbow & Brown Trout- The brown and rainbow fishing has been very good!  I’ve seen some schools of browns that look like kokanee schools.  Iola has some of the best trout concentrations, but Cebolla and Sapinero basins have some pockets holding lots of trout as well!  Rainbows are most consistently found in the top 15′ of the water column, while browns can be found from 15-60′ deep.  Arnies, kokanee killers, trout killers, Venator lures, Tazmanian devils, and the recommended kokanee gear have all been producing!

Lake Trout- The lake trout have started to push out of the shallows with the water temps holding above 52.  We have been catching some smaller lake trout mixed in with the kokanee 15-60 down.  Trophy fish require a lot more work, but can be caught by anglers who have an idea of what they are doing.  Catch and release is imperative with all fish over 30″ to preserve these magnificent fish!

Things are heating up!

Waiting for stability…
Scroll to top