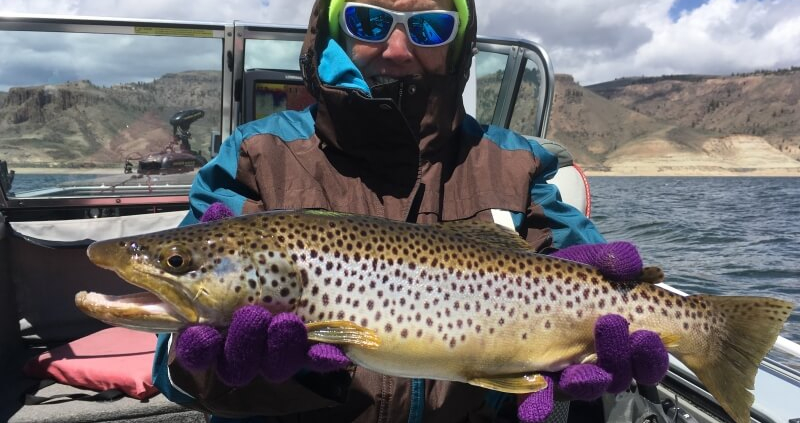 It has been a slow process, but the water temperatures are slowly starting rise with the few nice days we have seen.  All species seem to be responding to the rising temps in a positive way, but it looks like we are in for another week of storms so we will see if it lasts.  The brown trout population seems to be at or near an all time high in the lake and from some brief discussions on the dock, it seems that CPW is grasping the significance that the brown trout are having on the newly stocked 2-3″ kokanee salmon.  I would encourage you to keep your limit of brown trout under the 20″ mark, as there are plenty of them!  We are starting to see more brown trout over the 20″ mark, which has the potential to be an incredible resource and add even more value to the fishery at Blue Mesa, especially if we can release those fish to keep their genetics dominatnt in our lake!  Run off really hasn’t gotten going yet and as a result there isn’t much debris floating in the lake yet, but there are a few little logs, so always keep an eye out and use caution.   The lake seems to be holding around the 30′ low mark.  Right now all of the boat ramps are open except Ponderosa. The ramps are open from 6 a.m. to 8 p.m.  As of May 19th the hours will go to 5:30 a.m. to 9 p.m.  Ponderosa will open May 26 and the hours will be 8 a.m. to 4:30 p.m. Thursday through Monday.

Trout- the trout fishing is still excellent!  The weather was less than ideal in the Tournament last weekend, but plenty of browns were still weighed in and some nice ones at that! You can throw pretty much anything and catch fish along the shores and that’s where the majority of the fish are. If you are not seeing action, move a little ways and try again.  A lot of the rainbow trout are in the inlets and the backs of coves preparing to spawn. Maribou jigs, jerk baits, spoons, spinners, are all catching fish!  Crawdad, rainbow trout, perch, and sucker colors seem to work best.  The bite has been good all day long and the stormier the weather, the better.

Kokanee- the salmon activity has been fairly good for this time of year, but a lot of the fish are running small.  I anticipate that we will see another slow year for four year old sized salmon, but the population for fish under that size/year class appear to be strong!  From my few outings for kokanee thus far, it seems that it is hard to keep the small fish (1 & 2 year olds) off and it is important that we do the best we can to release those fish in good health.  I try to avoid touching them by leaving them in the net and using pliers to get the hooks out.  Get them back to the water as quick as possible and more often than not they will release just fine as long as they weren’t hooked bad.  If you do have one die, it does count as part of your possession so please don’t throw it out to the sea gulls!  The salmon have been all over the water column and where you will find them depends on the weather and their mood.  I have caught them on the surface all the way down to 70′.  Read your electrconics, tip your baits with corn, and if you know you are running through fish, but you are not getting bit, change your bait until you find a combo that they like. **Don’t forget that the daily bag limit has changed to 5 fish this year!  The rangers have been checking and handing out tickets to those who are over possession!

Lake Trout-   There have been some reports of some bigger lake trout being taken out of the lake and almost all of them are being caught on a dead sucker.  Yes, this technique is effective and yes it is legal.  However, the mortality rate is incredibly high!  More often than not, these big old fish either get hooked deep or sustain damage to their gills using this technique.  I was out yesterday when a gentleman on shore asked how we were doing. He proceeded to tell us that he had caught a 26 lber and tried to release it, but it wouldnl’t swim away.  It was the biggest fish he had evern caught and he had no intentions of keeping it and didn’t know if he could afford to get it mounted.  I went to shore to see if I could somehow help revive the fish, but it was too late. I encouraged him to get it mounted so that it didn’t go to waste and briefly explained the high mortality rate that results from his technique.  That fish was probably 25+ years old and could have lived another 25 years if given the chance.  If you must use suckers, consider experimenting with some Trokar saltwater circle hooks!  Using circle hooks, you don’t have to let the fish swallow the bait, you just start reeling once the bait is in the fishes mouth and 95% of the time the fish will be hooked in the corner of the mouth!  The number of trophy lake trout in Blue Mesa is considerably down from what it was 10 years ago and because of that, it is more important now than ever before to practice catch and release on the bigger lake trout!  Yes, it is legal to keep one fish over 32″ a day, and the decision is up to the angler, but I encourage you to do some soul searching before you even get to the lake.  I will give you a list of taxidermists that can make you an incredible replica that will last far longer than a skin mount and if you want food for the table, email me about tactics for targeting the sub 22″ fish that are the best eating and I will help you out!  “CPR” (catch, photo, release) will help ensure that furture generations have an opportunity to catch these rare, elusive giants of the deep!  Carl (pictured below) of Colorado was blessed with a fat 44″ lake trout on one of our trips and got to experience our CPR practices first hand!  He has memory and picture that he will never forget and he also has the satisfaction of knowing that he can come back in the future and have the posibility of catching that fish again!

Yellow Perch- it’s a little early for perch, but we have caught a few and have heard some reports of other folks catching a few. The bite is slow, but there are some decent fish to be had if you can find them and get them to bite!

Wild weather and more of the same Blue Mesa fishing!

Summer kick off!
Scroll to top