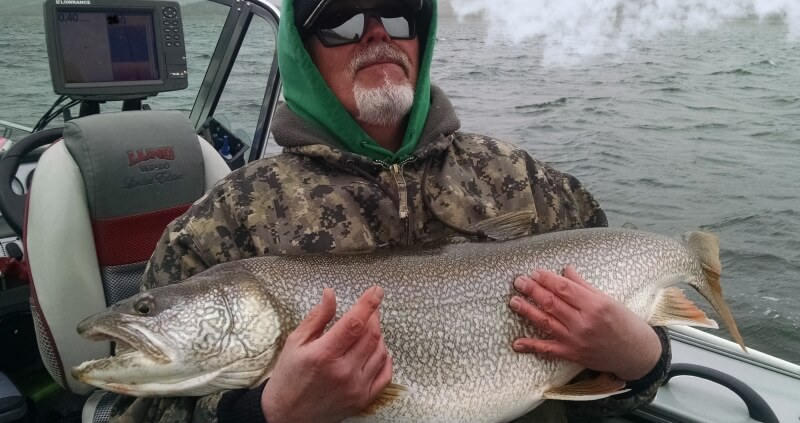 Elk Creek and Lake Fork boat ramps are both open from 6:30 to 4 and the hours are supposed to get extended in the near future!  Initially, it didn’t really feel like ice out as the weather was unseasonably warm, but the last week of weather has dropped water temps and we’ve had to earn our keep while fishing in the elements!  The marinas are set to open the first week of May in time for the 28th annual Kiwanis trout tournament!  First place is $3000 this year and there are some new improvements to make this tournament one of the best yet!! There are a few spots left. If you would like to join the fun, email Joann Stone @ JOANN.STONE@yahoo.com.  This is a great year to enter because the trout fishing for rainbows and browns has been excellent!

Trout- The quality and quantity has been some of the best we’ve seen in years!  You can catch them trolling, casting, and jigging.  Trolling has been very good on spinners, squids, and wobblers from Rocky Mountain Tackle, Radical Glow, Venator Lures, and Tazmanian Devil. This may sound repetitive, but these products just flat out work!  Casting has been good using Venator Wobblers, Dynamic Lures and Rapala jerk baits, and small tube jigs and maribou jigs.  Tip them with a meal worm, a night crawler, or a small piece of sucker meat.

Kokanee Salmon- Its still early and cold for kokanee salmon, but a few are being caught.  Most fish are being caught between the surface and 35′.  The fishing has been anything but consistent, but one key is to fish SLOW!  All of our salmon have come on Radical Glow and Rocky Mountain Tackle spinners and squids.  Per usualy, the color changes daily.  Greens, pinks, and whites have been best so far.

On another note, there was an Angler’s Roundtable in Gunnison held by the Colorado Parks and Wildlife on the upcoming regulation changes.  Most all of the local river and lake guides were there as well several passionate local fishermen.  Many great points were brough up with most of the emphasis on why the kokanee salmon numbers are down, what if any impact the lake trout netting is having on the kokanee population, and what the long term solution is.  While there is not an easy fix, the guides from Sport Fish Colorado, Gunnison Sports Outfitters, and Weekend Warrior Outdoors have agreed to do their part by only allowing their clients a five fish daily bag limit on kokanee salmon, which is half of the ten fish daily bag limit allowed by CPW.  Hopefully, we see something similar imposed by the CPW in the upcoming regulation change.

Lake Trout- The bite has been tough!  The water is cold and although a few nice fish have been caught, overall it’s been a lot of work to find fish, let alone catch them.  If you are blessed with the opportunity to catch a trophy, please consider catch, photo, release (CPR)! Despite popular belief, the number of trophy lake trout in Blue Mesa is down considerably and it’s important to preserve this resource!