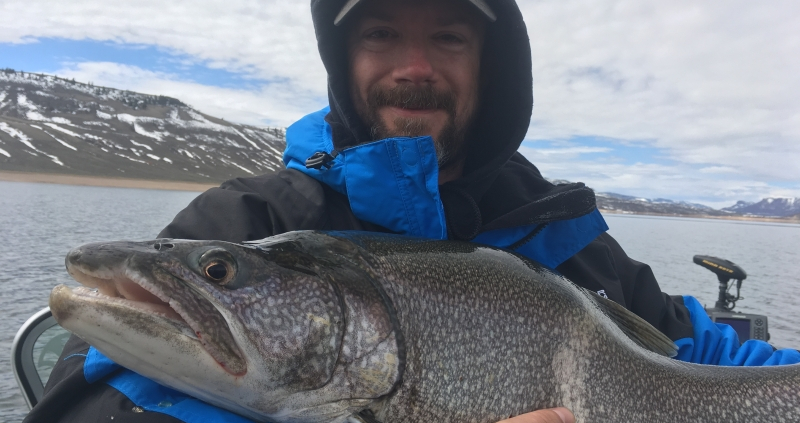 The time has come for the 2017 boating season on Blue Mesa to open up! The lake officially opened to boating on March 24th, which is the earliest I ever remember being able to get on the lake! Currently, the Lake Fork boat ramp is open from 6:30-4. And Elk Creek boat ramp should be open in the next few days. There is still some ice between Dry Creek and Iola, but it seems to be getting chewed up quickly. The water is cold, but the fishing has been relatively good as long as you cater your approach accordingly! Think SLOW. But also think opportunity! All species are looking to re-coup calories and as the water starts to warm a little, the fish will look to take advantage!

Rainbow & Brown Trout- fishing has been very good to excellent some days! Jerk baits, maribou jigs, spoons, and a variety of other baits have all been working, but Jerk baits and jigs are the ticket right now! Focus on the rocky shorelines.

Kokanee salmon- it’s too early to catch kokanee right? Not exactly.. The water is cold and their metabolism is nowhere near peak, but they can be caught this time of year, especially when the salmon population is as high as it is right now! So far, we have seen schools across every part of the open water; big schools too! We haven’t spent a lot of time fishing for them, but have caught them when we tried. They seem to be shallow early and then drop into the 40-80 feet range later on in the day.

Yellow Perch- I’ve heard of a few caught, but have not fished for them.

Lake Trout- ice-off/spring is a well-known window to target trophy lake trout! However, this doesn’t necesarrily mean that it’s easy, it just means that there are a lot more opportunities. These big fish are old and smart and since the CPW started netting and removing them in 2009, we have not seen the numbers of trophy fish that were present in the early to mid 2000’s. We don’t keep many lake trout and release all lake trout over 22″ to help ensure that there will be a trophy population of lake trout into the future. Blue Mesa is a unique fishery and it is extremely important that we protect the trophy lake trout resource! Blue Mesa is capable of growing lake trout that some people are willing to drive as far as Canada to catch and we are blessed to have it in our very own state! If you are blessed with the fish of a lifetime, please consider getting a length and girth measurement, some good pictures and letting it go to grow and be a memory for yourself or somebody in the future!

Blue Mesa Fishing Report: water temps and levels have been on the rise!
Scroll to top