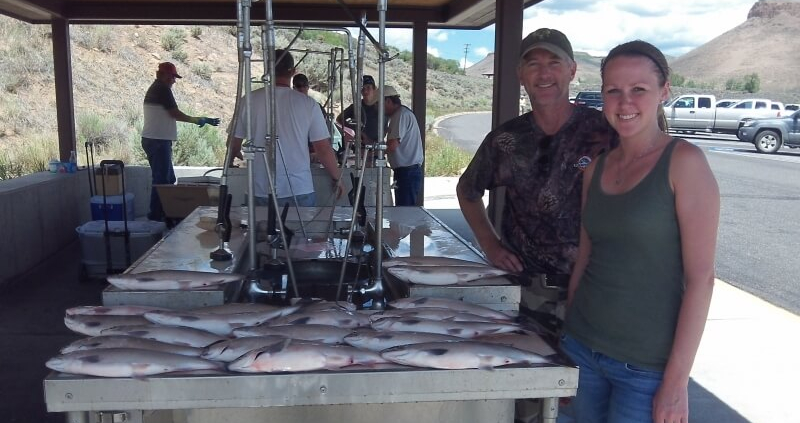 We are 100% in the trophy kokanee pattern and the bite has been hot!  There have been some of the biggest schools of salmon we have seen in the last decade!  Because of this, there are plenty of schools for every angler who chooses to spend the time to look for a school on their electronics instead of being a shark like 90% of the boats on the water!  This last weekend was one of the worst I have ever seen for fishing etiquette.  I constantly had to push boats off of every side of my boat after finding a school.  This is absolutely absurd!  Due to the gluttony I have witnessed over the last several weeks, I feel the need to state that kokanee fishing is supposed to be a fun, sporting outdoor activity; not a mission to deplete Blue Mesa of its kokanee salmon population or stock up on salmon for the next “x” number of years!  The number of fish that I have seen the SAME anglers keep is disgusting!  The possession limit is 10 fish per angler, which is more liberal than anywhere else in the country!

If you truly enjoy kokanee fishing and have alreay caught your limit and still want to fish, try catch and release!  I can’t count the number of times I have gotten dirty looks for letting four year old salmon go, but these fish are very hardy this time of year and if you are careful when getting the hooks out and do it as quickly as possible, these fish will survive just fine!

Trout- Rainbows are showing up from the surface down to 42′.  The Lake City Bridge inlet has been good early in the mornings!  Some anglers have been doing well trolling z-rays, rooster tails, kastmasters, and tazmanian devils in 1-25′ of water for more rainbows.  You can usually see a lot of rainbows feeding on the surface in the morning when the water is calm.  Browns can be found most consistently in 5-70 feet of water along rip rap shorelines and off of the points. They are shallow early and late in the day and then they drop back down into deeper water.  Crankbaits, jerkbaits, and maribou jigs have been consistent producers as well as kastmasters, krocodiles, and blue fox spinners.

Lake Trout- Mackinaw fishing has slowed, but some decent fish are still being caught from 80-140′.   These fish are roaming several different types of structure such as points, humps, sunken islands, and flats as well as suspending out over deep water.  Trolling some type of rainbow or salmon imitation or jigging a tube jig with sucker meat or Berkley gulp! minnow has been most effective, although we have been catching some nice lake trout on unorthodox trolling gear as well.

Kokanee Salmon-   Trolling is still good from 40-80′ depending on the part of the lake you are on.  Change depths frequently until you find results.  These fish move up and down a lot depending on the conditions so don’t lock yourself in to a certain depth.  Knowing how to read your fish finder is a critical skill in consistently catching these fish.  All colors have been producing depending on the day, but chartruse, pink, orange, white, and green have been the most consistent.  Rocky Mountain Tackle squids and spinners and Radical Glow spinners and tubes accompanied by our Lazer hooks from Eagle Claw have been hot!  This stuff is the hottest kokanee gear on the market!  As usual, tip your offering with white shoe peg corn and run them behind a Rocky Mountain Tackle dodger.