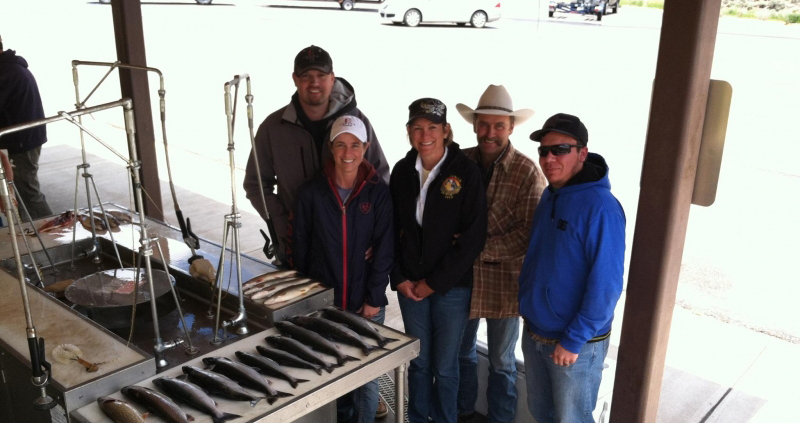 It is becoming more and more apparent the CPW’s sonar surveys (that showed the kokanee numbers being down) are accurate.  Several years of low water created a “bathtub”effect that resulted in higher angling pressure and predation.  Take less fish and spread them over a bigger area and you can explain the 2014 Blue Mesa kokanee salmon fishing.  With that said, there are still fish to be caught and the full moon has improved the bite; at least temporarily!  More good news is that the lake has actually come up a foot since our last report as runoff has finally started to taper off.  The water temps have warmed considerably with morning temps starting around 67 degrees and climbing to as high as 73 degrees some afternoons.  We are in a very consistent monsoon pattern so beware of storms in the afternoons.  Good luck and God Bless!

Kokanee Salmon- It’s still work, but some limits have been coming in if you can dial in a pattern.  Most of the fish are now in the 15-45 foot range, but we did have one day last week where the bite was hot at 8-10 feet!  Experimentation remains key!  Patterning colors has become far more effective over the last week, but more often than not, the kokanee will key in on a couple of color/action combinations that they really like and ignore any presentation that doesn’t match.  Days that start off sunny are still better than days that start off cloudy but we have had some good days that start off cloudy. We are seeing some absolute giant kokanee in the 19-22″ range and a lot of the males are already getting a bit of a beak! It will be interesting to see what August holds for size!

A little bit of everything has been working in every color.  Pinks, oranges, chartrueses, and greens have all been working at some point during the day. Rocky Mountain Tackle and Radical glow spinners and squids have been top producers as well as kokanee killers, arnies, wedding rings, and wee tads.  If you can’t seem to get a bite, pick out the lure you have the least amount of confidence in and give it a try!  This is the honest truth and some of the “oldies” are having moments of glory!

Rainbow & Brown Trout– The trout bite remains good but there have been some days that they are unusually picky!  Rainbows can be found from the surface to 20′ and if you can find a color they like the action can be good!  Brown trout can be found 20-50′ and the action for them has been good, especially in the morning. Rocky Mountain Tackle, Venator lures, Arnies, Needle Fish, Taz’s and Radical Glow spinners have all been producing. Use your electronics to your advantage as some areas are stacked with trout!  Every day the preferred depths seems to change and some of the deeper fish are still very keyed in on small red worms and another larva.

Mackinaw Lake Trout-  No change…We are catching some smaller lake trout mixed in with the kokanee salmon occasionally on the same baits.  You can improve your odds greatly by fishing 45-80 feet of water.  Once again, watch your electronics as some areas seem to have “layers” of fish at these depths!  The bigger fish are suspended at 50-110′ over deeper water. Always remember the importance of releasing trophy lake trout to ensure future generations get the same opportunities we get!  And despite no bag limit on the smaller lake trout, only take what you can eat! These fish are the future of the trophy generation!

Perch- The perch are in the coves and there have been several reports of lots of action! Elk Creek, Lake Fork, and Bay of Chickens are just a few of the areas holding fish. Yesterday, we found an 11″ perch floating dead!   With all of the brush that has been covered with the rise of the lake, the perch should have an excellent spawn and the fry should have plenty of places to hide!  Smaller perch can be found in the backs of brushy coves in 8-25′ of water.  They will be hard to see on your electronics due to all of the brush, but a small jig and a piece of night crawler will quickly tell you if they are in the area!