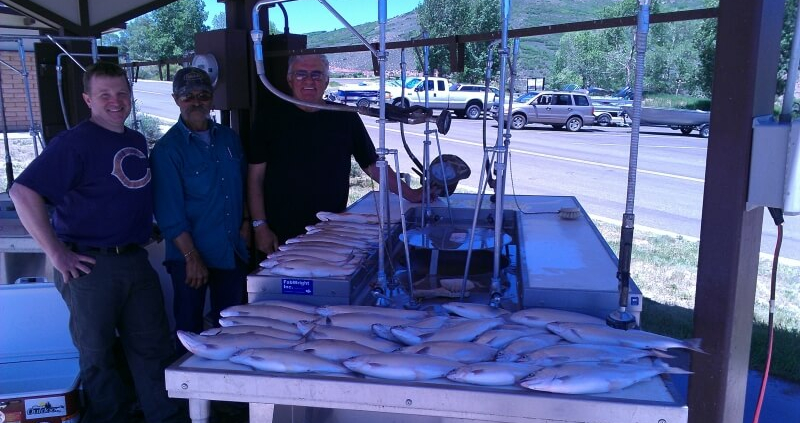 The fishing at Blue Mesa Reservoir has been very good overall! However, the last week has been very interesting. After consistent thirty to forty fish days last week, the bite window has decreased and the average has been reduced to twenty-five fish days. The water temperatures are close to optimal for kokanee and warm enough to push lake trout deeper. On a side note, the rainbow trout bite has been better than normal with three to twelve fish being landed a day while trolling for salmon. As we leave the new moon phase, we should see some of the best salmon fishing of the season!

Rainbow trout can be found roaming from one to twenty-five feet while brown trout are suspended from twenty-five to sixty feet. While Rapalas work, finding the right dodger and squid combination can be far more productive. The best action for these fish has been in the first few hours of the morning.

Overall this season the kokanee salmon bite has been excellent! However, the past week has yielded a great first light bite followed by a “one and done” lure pattern where finding a lure that catches more than one fish is the key. These fish are mainly concentrated from the surface to thirty-five feet. Pinks, greens, oranges and chartreuses have all had their time and place each day. The trick is timing each color right and covering water to run into the fish that are actively feeding.  The last two days have yielded better results with a lot more actively feeding fish showing up throughout the day.

The netting efforts by the state have definitely had an overall effect on the number of smaller lake trout that we usually catch mixed in with the salmon. These fish can be targeted by finding concentrations of echos at depths from forty to one hundred feet. Kokanee Killers and a dodger with a white squid are consistent producers. The larger fish have been hard to locate on a consistent basis since our water temps are now hovering between 58-61 degrees.

May 2013 Blue Mesa Fishing Report: Big fish are lurking, kokanee are ready to...