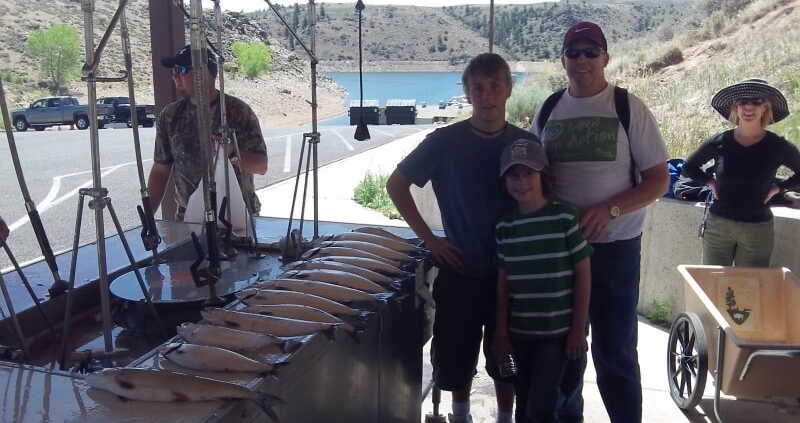 We have been very busy on Blue Mesa, but fishing has remained consistent with good quantity and quality! The water temps have warmed up all across the lake and there are active schools of salmon from Iola basin to Sapinero basin!  The water level has been slowly dropping, but don’t be fooled by the rumors, this does not hurt the fishing.  It actually condenses the fish into a smaller area so they are easier to find.  It is up to YOU to figure out how to catch them!

Trout– Rainbows are showing up from the surface down to 27′.  We are mostly catching these fish on kokanee tackle while fishing for salmon.  Some anglers have been doing well trolling z-rays and tazmanian devils in 1-15′ of water for more rainbows.  Browns can be found most consistently in 5-35 feet of water along rip rap shorelines and off of the points. They are shallow early and late in the day and then they drop back down into deeper water.  Crankbaits, jerkbaits, and maribou jigs have been consistent producers as well as kastmasters, krocodiles, and blue fox spinners.

Lake Trout– Mackinaw fishing has been fair.  These fish are running 40-100 deep right now.  These fish are roaming several different types of structure such as points, humps, sunken islands, and flats.  Trolling some type of rainbow or salmon imitation or jigging a tube jig with sucker meat or Berkley gulp! minnow has been most effective.

Kokanee Salmon– As usual, every day on the lake has been a little bit different, but these fish are hanging out in 1-80′ of water with lots of action from 15-45′.  Change depths frequently until you find results.  These fish move up and down a lot depending on the conditions so don’t lock yourself in to a certain depth.  Knowing how to read your fish finder is a critical skill in consistently catching these fish.  All colors have been producing depending on the day, but pink, orange, white, and green have been the most consistent.  Rocky Mountain Tackle squids and spinners and our Lazer hooks from Eagle Claw have been hot!  Tip these with white shoe peg corn and run them behind a Rocky Mountain Tackle dodger.