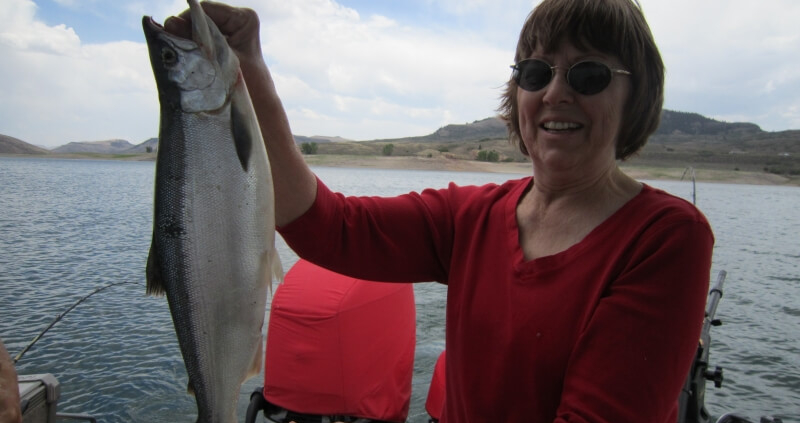 This summer is holding its reputation as one of the best salmon years in the last decade!  We have been on the water EVERy day with little time for fishing reports.  So here’s a safe rule for my fellow anglers who follow and rely on these reports for their own fishing adventures; if we go long periods of time between posting fishing reports, it is safe to assume that the fishing is still good and you should probably get down here!  You can also send me a text with your name and I will give you a brief report (719-649-3378)  Lots and lots of nice fish have been coming to the fillet stations at Elk Creek, Lake Fork, Stevens Creek, and Iola boat ramps!  Thus far, everything seems to be running a few weeks ahead of schedule and I have a feeling that our trophy Kokanee season that usually gets going around the first part of August is going to be no exception!  We are already quickly booking up for the hottest bite of the year, so be sure to call and book a date before it is too late!  We are currently seeing water temperatures that we usually don’t see until the first part of August if at all and these temps have caused the lake to turn over in the last ten days putting a nasty algae across much of Blue Mesa.  If this algae builds up on your line, take your rod out of the down rigger and shake it back and forth.  You do not want this algae to build up on your line and jam up your level-wind reel when you are fighting a fish!Have a good 4th of July celebrating the awesome country we live in and be safe!

Trout– Rainbows are showing up from the surface down to 42′.  We are mostly catching these fish on kokanee tackle while fishing for salmon.  Some anglers have been doing well trolling z-rays, rooster tails, kastmasters, and tazmanian devils in 1-25′ of water for more rainbows.  You can usually see a lot of rainbows feeding on the surface in the morning when the water is calm.  Browns can be found most consistently in 5-70 feet of water along rip rap shorelines and off of the points. They are shallow early and late in the day and then they drop back down into deeper water.  Crankbaits, jerkbaits, and maribou jigs have been consistent producers as well as kastmasters, krocodiles, and blue fox spinners.

Lake Trout– Mackinaw fishing has been fair to good.  These fish are running 40-160 deep right now.  These fish are roaming several different types of structure such as points, humps, sunken islands, and flats as well as suspending out over deep water.  Trolling some type of rainbow or salmon imitation or jigging a tube jig with sucker meat or Berkley gulp! minnow has been most effective, although we have been catching some nice lake trout on unorthodox trolling gear as well.

Kokanee Salmon– As usual, every day on the lake has been a little bit different, but these fish are hanging out in 1-100′ of water with lots of action from 15-50′.  Change depths frequently until you find results.  These fish move up and down a lot depending on the conditions so don’t lock yourself in to a certain depth.  Knowing how to read your fish finder is a critical skill in consistently catching these fish.  All colors have been producing depending on the day, but pink, orange, white, and green have been the most consistent.  Rocky Mountain Tackle squids and spinners and Radical Glow spinners and tubes accompanied by our Lazer hooks from Eagle Claw have been hot!  This stuff is the hottest kokanee gear on the market!  As usual, tip your offering with white shoe peg corn and run them behind a Rocky Mountain Tackle dodger.