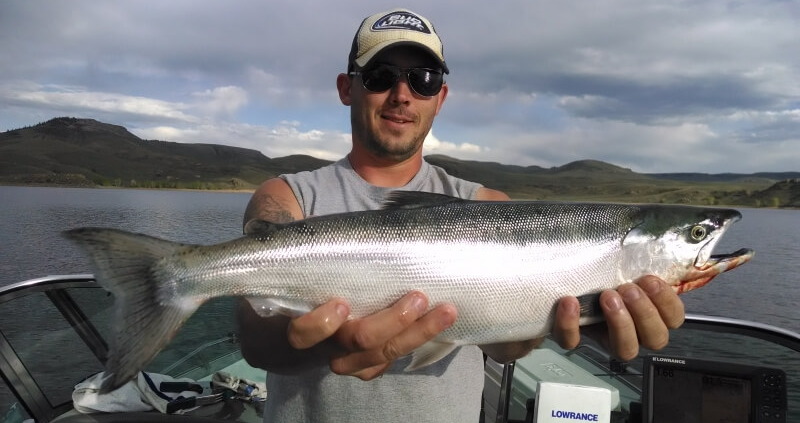 As the lake continues to rise and a few fronts actually dropped water temperatures, the salmon fishing was actually even tougher over the last week!  But don’t be alarmed, runoff has peaked and is starting to slow down a little and the lake is only ten feet from where the BOR plans on filling it to.  Floating debris continues to be a potential problem across the lake and Iola seems to be the worst.  Be careful and pay attention to where you are driving!  Shore fishing continues to be a challenge, but rocky and sandy areas that don’t have brush can produce!

Kokanee Salmon- Three factors have contributed to a tough kokanee salmon bite; rising water levels, cool water temps, and a lake that has considerably more surface acres than it has had over the last few years!  Every basin seems to be producing fair numbers of salmon.  The salmon are still SHALLOW!  This week they seemed to move even shallower, but you can find fish from the surface to 25′ depending on the time of day.   These fish are really picky so be sure to wash several lures in search of one they like!  They will zone in on a few lures each day and if you can figure those lures out you will have a good day.  If not, you might luck in to a few fish.  Days that start off sunny seem to be FAR better than days that start off cloudy.  A little bit of everything has been working in every color.  I know that doesn’t help narrow anything down, but it truly has been a guessing game each day to figure out any kind of a pattern. Rocky Mountain Tackle and Radical glow spinners and squids have been top producers as well as kokanee killers, arnies, wedding rings, and wee tads.  If you can’t seem to get a bite, pick out the lure you have the least amount of confidence in and give it a try!

Rainbow & Brown Trout– The trout bite has been good overall, especially if you want to target the browns that are hanging out deeper in 20-60 feet of water.  Venator lures, kokanee killers, tazmanian devils, and kokanee gear have all been producing.  Watch your fish finder as some for the flats, points, and humps are loaded with trout.  Circle these areas until you figure out what they want.

Mackinaw Lake Trout-  We are catching some smaller lake trout mixed in with the kokanee salmon occasionally on the same baits.  The bigger fish have headed deeper as the water temps are still nearing 60 degrees. Always remember the importance of releasing trophy lake trout to ensure future generations get the same opportunities we get!  And despite no bag limit on the smaller lake trout, only take what you can eat! These fish are the future of the trophy generation!

Perch- the perch are just starting to show up in the coves.  With all of the brush that has been covered with the rise of the lake, the perch should have an excellent spawn and the fry should have plenty of places to hide!  Smaller perch can be found in the backs of brushy coves in 8-25′ of water.  They will be hard to see on your electronics due to all of the brush, but a small jig and a piece of night crawler will quickly tell you if they are in the area!

Quality over quantity….
Scroll to top